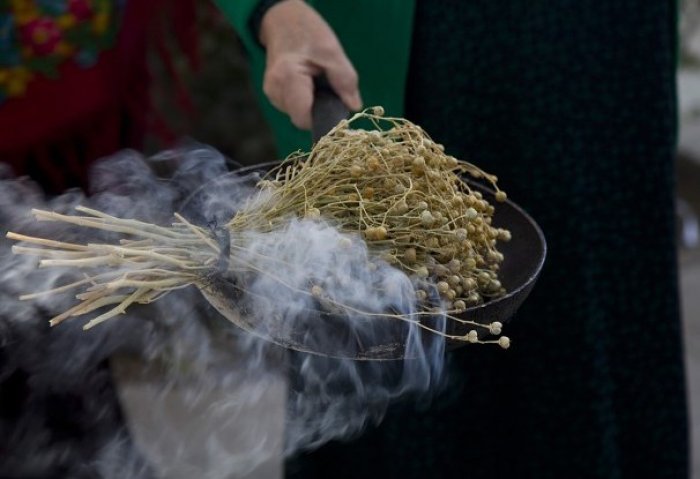 Harmala smoke eliminates bacteria and repels insects due to the alkaloids contained in the leaves and seeds of the plant.

At a meeting of the Cabinet of Ministers of Turkmenistan, it was noted that smoke from burnt harmala (juzarlik) prevents a number of infectious diseases that periodically occur at certain times of the year and strengthens the human immune system.

“Over the millennia, our ancestors have developed effective national methods of combating addictions and preventing various infectious diseases,” President of Turkmenistan Gurbanguly Berdimuhamedov said during the video conference session on Friday, adding that the tradition of burning the ‘sacred plant’ is being continued in accordance with the spirit of the modern era.

During the meeting, the special benefits of harmala, described in the multivolume scientific work of the Turkmen Leader “Medicinal Plants of Turkmenistan”, for human health were highlighted

Nowadays, harmala is known as an effective remedy for many ailments. It is widely used in modern medicine.

It has long been proven that harmala smoke eliminates bacteria and repels insects due to the alkaloids contained in the leaves and seeds of the plant.

The Head of State said the placement of harmala image on the medical symbol of Turkmenistan is no accidental as it is widely used in the prevention and treatment of many diseases in Turkmen folk medicine and scientific medicine. Turkmen President noted that the centuries-old life experience has proven the effectiveness of harmala smoke in preventing the spread of different types of viruses into the human body.

In this regard, the President drew attention to the special significance of the folk tradition of burning harmala in the context of the complex situation that has arisen in the modern world. The Head of State then gave a number of specific instructions to the Deputy Prime Minister Purli Agamyradov and the Minister of Health and Medical Industry Nurmuhammet Amannepesov on the organization of the relevant outreach work among the population.